Satsuki performed in Voodoo Club in Warsaw on the 1st April.
Asian Music Polska‘s team had a chance to ask him few questions before the concert.
Enjoy! 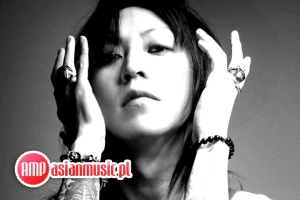 AMP: You played already five concerts during this tour – how’s it going so far?

Satsuki: Fans’ reaction has been very good and energetic.

AMP: Your fans who has come to see you perform today know your music very well, but how would you describe it to someone who hasn’t heard your songs yet?

Satsuki: I’ve just released my new double album. “Apocalypse” feature metal songs whereas “Eclipse” has songs which present my style, Satsuki’s style, as it has been till now and I would call it a mix of visual kei and metal. How to describe my sound… It’s just my music, Satsuki-style music.

AMP: When creating these albums you’ve worked with European producers – how have you met them?

Satsuki: We met thanks to Too Wild [note: company responsible for Satsuki’s tours] during my previous European tour called “Squall of Emotions”. We’ve decided to create something together.

AMP: How was the cooperation?

Satsuki: It was a new challenge for me.

AMP: If you put both albums right next to each other, they create together one of your paintings. Your paintings are also sold at the venues. How long have you been painting?

Satsuki: I’ve been painting for a really long time now, but I’ve started showing my works to others just recently.

AMP: You’ve also created a clothes brand called Sacred Traditional Kingdom Melody. Can you tell us something about it?

Satsuki: Firstly, the brand’s name is also one of my tattoos [points to a tattoo on his right arm]. Fans have often asked me about that tattoo… I’ve decided to combine together my paintings and that tattoo and that’s how the brand was created [note: the clothes feature Satsuki’s paintings].

AMP: You’ve performed in Poland few times already. What is your impression of this country?

Satsuki: On my DVD titled „Moulin Rouge” there’s a music video recorded during my live, it was a song prepared especially for Poland. I remembered that Polish fans are full of energy and passion. It was recorded during my live in 2012 when I came here together with Kaya… I was really surprised that I have fans even in Poland!

AMP: Do you have any interesting story connected to your stays in Poland?

Satsuki: I didn’t have time to leave the clubs in which I’ve performed. Every time we just arrived by car at the venue and then right after the concert we drove to the next country, so I don’t have any stories like this… But I always remember fans who greet me here so kindly every time.

AMP: You’ve already performed in Wrocław and Poznań, today you’re playing in Warsaw. Is there any other place in Poland which you would like to visit?

Satsuki: Unfortunately I don’t know myself, haha. Anyway the pronunciation of “Warsaw” is difficult…

Satsuki: Yes, yes, in Japanese it’s almost the same, Warushawa… English name “Warsaw” didn’t really tell me much and it was difficult to remember… And as for the other places in Poland, I would like to visit as many of them as possible.

AMP: Your European tour ends in May. What are your future plans? What will you be doing next?

Satsuki: I have to work on my new songs to come back here next year.

AMP: Let’s talk some more about your music. What is your inspiration for songs?

Satsuki: I get inspired mostly by my own diary. I change my thoughts into songs so I won’t forget the feelings and emotions which I felt at a certain moment.

AMP: Who are the artists who you respect the most? Are there any artists who in your opinion influenced your work?

Satsuki: Hyde and Yoshiki have always been such people to me. I think that they are really great artists. They’re like my heroes.

AMP: And is there anyone like that among the Western artists?

AMP: Now it’s time for something fun! Imagine that you change into one of Disney princesses – which one would it be and why?

AMP: And if it could be any movie, TV show or anime character?

Satsuki: [Thinks a longer while].

AMP: No one comes to your mind?

Satsuki: No, no, there are just too many… Maybe… Doraemon. You know Doraemon, right? He has a magic pocket and magic doors through which I could travel to Poland. I would be able to teleport here really quickly!

AMP: Now imagine that for one day you are a woman! What would you do?

Satsuki: Hmm, what would I do… I would wear really pretty make-up… and go to Harajuku, haha. I would love to wear Harajuku-style clothes. I think that it would be a really fun day.

AMP: You used to have a project called “Gomi Fantasista” [note: “gomi” means “rubbish” in Japanese]. Also before your concert in Poznań, you joined the fans in front of the club and picked with them the rubbish that was thrown around. Can you tell us something more about this?

Satsuki: I think that the traditional Japanese beauty is a part of visual kei. Even a male can wear make-up and take care of his nails. When a visual kei artist visits a city, everyone thinks that the city also should be beautiful. I would like everyone to talk between themselves that when Satsuki comes, the city becomes cleaner and prettier, all the rubbish disappears and there are many beautiful boys and girls waiting for the concert. Everyone would be wondering what is going on, what the event is, haha.

AMP: Thank you very much for answering our questions! We hope that the concert will be really fun for us all!

Satsuki: Me too, thank you!

Satsuki‘s European tour continuous till 16th May.
We would like to thank the artist and Too Wild for this interview. 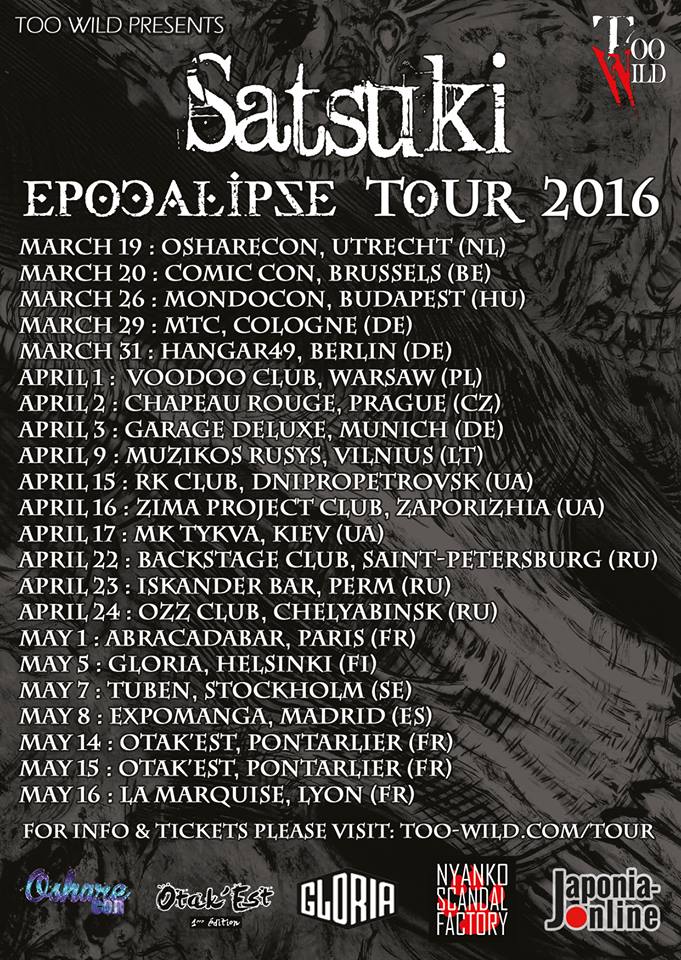